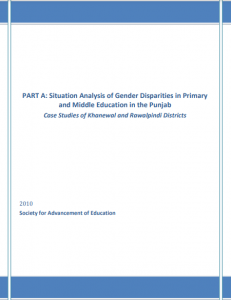 Strategic policy interventions can play a central role in changing the existing scenario of gender disparities provided they are based on accurate and reliable information. Recognizing the gap in understanding the prevailing situation in education, the School Education Department in Punjab identified two focus districts – Rawalpindi and Khanewal – to be made as ‘Model Districts’ from a gender perspective. This work is being carried out under the Gender Education Policy Support Project – GEPSP.

The Society for the Advancement of Education (SAHE) and SIMORGH entered into a partnership to conduct the study which looks at two distinct yet related areas in the context of education. Part A consists of the situation analysis with regard to provision, gaps and issues in education from the gender perspective at the provincial, district and district levels and has been managed by SAHE. Part B looks at the curriculum and specifically textbooks from a gender lens.

Our special thanks go to the team from SAHE who worked on various aspects of the report. Mr. Mashaallah coordinated the fieldwork in the two districts and also conducted focus group discussions. His insights into gender issue relating to communities, teachers and students in particular have contributed to the analysis. He has been supported in the field by the Pakistan Young Lions Council, an NGO working in Khanewal district and by Mr. Iqbal Manzoor and Mr. Nadeem Shabbir from SAHE as well a number of other field researchers in district Rawalpindi. Thanks are also due to our data entry team members and to Mr. Saleem Baig for extracting relevant data from secondary resources.