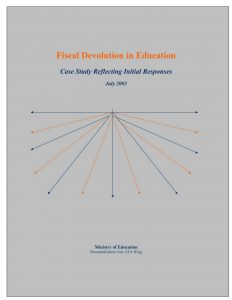 This study aims to assess the effectiveness of the Education Sector Reforms Action Plan 2001-2005 by calibrating the extent to which fiscal decision-making authority has been devolved to school-based governance as part of the drive to empower districts with development objectives. Since the aims of the study included evaluating the quality of education, it employed a multi-tiered approach by surveying government as well as school officials. The process included a review of published documents and reports of the Government and the Ministry of Education, examining official files of the provincial Department of Education and official records of the Finance and Planning and Education Department in the districts. The study was conducted in 2 districts,Pishin in Balochistan and Pakpattan in Punjab, to include a diverse sample of districts which are at different levels of development.

Decisions involving fiscal transfers, delegation of financial powers and their subsequent designations as well as flexibility of need-based allocations were labeled as adequate gauges of fiscal devolution. Since an interim arrangement of formula-based fund transfer was active during the period of the study, the findings can only reflect the adequacy of such provisional measures and advise improvements. The findings highlight the inability of school heads to implement their decisions, reflecting the lack of devolution at such levels, and emphasize a transparent and equitable delegation of authority which enables institutional capacity-building. The study noted that the linkage of roles and responsibilities with authority is required for implementation and bringing clearer guidelines for a coordinated effort within administrative levels. The study also found that the system was unable to cope with the demand of education, thus schools face inadequate resources, funds and essential coordination to provide quality education. The study recommends increasing community participation through training politicians, local NGOs and raising voting strength in the district council, as well as enhancing head teacher authority and elevating school grants and funds for teacher training programs.