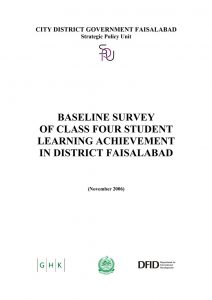 The aim of the Baseline Survey of Student Learning Achievements in City District Faisalabad was to establish a reference point for student achievements against which the Faisalabad District Government could monitor and evaluate improvements in the quality of education over time. The methodology for conducting the survey was developed keeping in view the interventions carried out under the Whole School Development project, which had future interventions planned for the regions the survey targeted i.e.the same union councils in Lyallpur, Jaranwala and Samundri. According to selected criteria, 420 students from 14 schools formed the sample.

Findings show that student scores progressively decline from kachi to class two, indicating the difficulty teachers have with explaining concepts at a higher level. Scores were low in Urdu across all grades. Girls performed better in Urdu especially in reading compared to boys, but had more difficulty in math word problems.Conditions were generally poor in most schools, requiring minor if not major repairs, especially with regard to boundary walls and toilets. The survey found that while schools that performed better had better infrastructure in general, the teacher remained critical to the learning process. A smaller number of committed teachers who know their subject were more effective than poorly-qualified, disinterested teachers for every class in a school. Schools with at least three teachers and classrooms were the bare minimum for better student achievement. The recommendation emanating from the findings include improving the conditions of schools, hiring better teachers or conducting intensive teacher training’s, devising strategies to deal with the age factor in teachers, using the phonics method and practicing writing when teaching Urdu instead of memorization, explaining math concepts in different and creative ways and through various interesting exercises is needed, as well as by monitoring the dropout rate in the lower primary classes