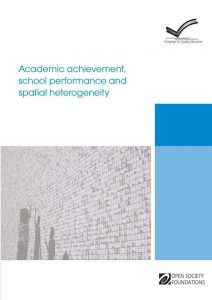 The establishment of the Punjab Education Sector Reform Program in 2003 was the catalyst for various initiatives that produced data for guiding education policy in the province, both through providing information about various school inputs and by revealing differences in student learning outcomes. However, the role of such data in generating meaningful and reliable evidence for informing policy remains under-utilized. This paper seeks to contribute towards the generation of such evidence by making use of the two existing large data sets in Punjab to understand the correlation between school inputs and student achievement. The school input data was provided by the Program Monitoring and Implementation Unit, and data on student outcomes was available through the standardized grade 5 and grade 8 exams conducted by the Punjab Examination Commission.

Through combining and analyzing data from these two sources, the paper found that the variation in learning outcomes was more substantial within administrative units such as districts and tehsils than across them. It also found no evidence of differences in test scores across urban and rural areas. Given the heterogeneity in school quality within districts, the paper recommends that the education reform effort in Punjab would do well to devise a school-focused approach instead of a regional one. It also found that school inputs explain a sizable portion of the variation across schools, but concludes that further research is required for more definitive evidence on the causal impact of various school inputs on learning outcomes.